Florida is finally getting an intercity passenger rail system that will link the popular tourist destinations of Orlando and Miami. After more than 16 years of political blockage by Republican governors, it took significant private investment to put the project into place. Once built Brightline will offer numerous benefits for the state, from lowering the amount of emissions from cars on Interstate 95 to offering a safer option for intercity travel.

It is widely recognized that the United States is in need of an infrastructure overhaul, and projects like Brightline offer a outline of the kinds of plans other states should adopt. This is particularly important because the US economy, despite the conviction of some economists, is operating under capacity, and infrastructure is seen as a safe, reliable  option to stimulate the economy. After decades of national subsidies favoring highways, rail projects such as Brightline will lead the transition away from carbon-dependent transportation and towards a more sustainable future.

All Aboard Florida, the company behind Brightline, is a wholly owned subsidiary of Florida East Coast Industries (FECI). FECI is owned by private equity funds managed by affiliates of Fortress Investment Group, a global investment manager which currently manages assets worth $70.6 billion (£58 billion). All Aboard Florida is fundamentally different from the current national model of inter-city train travel as it is a private venture. Amtrak, a government for-profit rail service founded in 1971, has had a monopoly on the operation of inter-city passenger trains for the past 45 years yet has failed to properly compete with the airline industries. 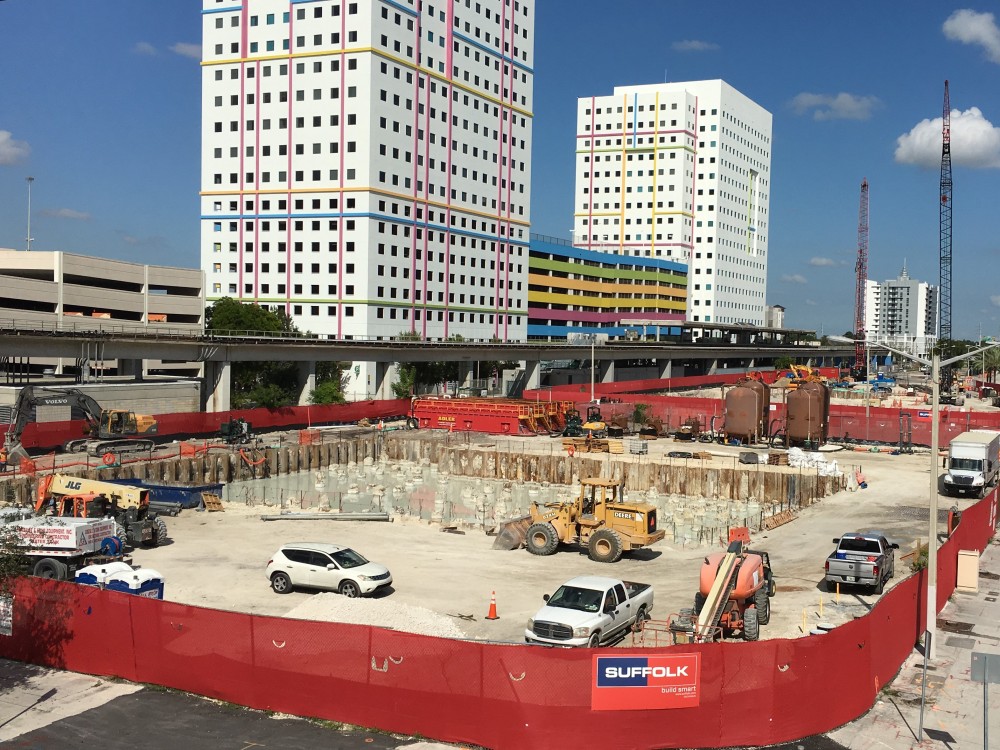 The cost for the refurbishment of the existing Florida East Coast Railway and the construction of the new 40 mile stretch of track is projected at $1.5 billion (£1.23 billion), which All Aboard Florida is funding primarily through bonds. In 2013 the company applied for a $1.6 billion (£1.32 billion) Railroad Rehabilitation and Improvement Financing (RRIF) loan, which was administered by the Federal Railroad Administration. In late 2014, All Aboard Florida announced it had applied for a $1.75 billion (£1.44 billion) private activity bond allocation, with proceeds from the bond sale substantially reducing the amount of the RRIF loan request.

Brightline trains will operate at an average speed of 80 miles per hour (129 km per hour) to make the trip between Miami and Orlando take three hours, a full hour less than it takes to travel the distance by car. Few delays are expected.  Even though freight trains already operate on the Florida East Coast Railway, they travel at relatively high speeds and are not expected to delay the sixteen daily Brightline services. There are around 500 million car trips annually between Miami, Fort Lauderdale, West Palm Beach and Orlando, an amount that the Interstate 95 highway is ill-equipped to deal with. According to Florida Highway Patrol, I-95 in Florida has the highest fatality rate of any road in the country. In a state where kids as young as 16 can get a driver’s license, the train provides a far safer option for people of all ages to travel along the east coast and into Orlando. The number of accidents and pollution caused by car traffic are issues that are mitigated by passenger rail.

Brightline’s Siemens trains will feature ergonomic seating, wi-fi, level boarding, at-seat power sockets and USB connectors. These features, along with the relatively short journey time, will make the service an attractive option for the millions of tourists and locals who wish to travel between Orlando and Miami. With these obvious benefits of a rail service in the third most populated U.S. state, one must wonder how it has not already been created. The answer requires one to look at past political and historical events in the Sunshine State.

Florida does have a history of passenger trains. In the last quarter of the 19th century and the first decade of the 20th century, the Florida East Coast Railway corridor was constructed by Standard Oil founder Henry Morrison Flagler. An entrepreneur who partnered closely with John D. Rockefeller in building the Standard Oil Trust, Henry Flagler was a proponent of the vast potential of Florida’s east coast. He subsequently began developing resorts, industries, and communities along this part of the Sunshine State. Flagler’s crowning achievement in the railroad industry was his construction of a railroad to Key West, which was completed in 1912. However, his railroad project started its decline when the line to Key West was heavily damaged by the Labor Day Hurricane of 1935. The State of Florida subsequently acquired the remaining right-of-way and bridges south of Dade County and they were rebuilt into road bridges for vehicle traffic. Passenger service was discontinued in 1968 after the FEC experienced violent labour unrest and declining passenger numbers with the wider availability of the car.

In 2003, Republican Florida Governor Jeb Bush vetoed funding for the project that the Florida Legislature had approved for the first phase. The HSRA continued to move forward with the project, using funds already authorized by the federal government.

In early 2004, Jeb Bush continued to try to thwart high speed rail in Florida as he endorsed an effort to repeal the 2000 amendment that mandated the creation of the High Speed Rail System. Later that year, Florida voters repealed the 2000 amendment, consequently removing the constitutional mandate for the system. Despite the repeal, no further action was taken by the state legislature in relation to the Florida High Speed Rail Authority Act. Florida’s HSRA continued to meet and finished the environmental impact statement for the Tampa-Orlando segment in 2005. With the constitutional mandate now gone for the project, funding stopped and little progress was made on passenger rail in Florida.

It would take the financial crisis to rekindle high speed rail progress in Florida. In February 2009 as part of the American Recovery and Reinvestment Act (ARRA), Congress allocated $8 billion (£6.58 billion)to be granted to states for intercity rail projects.  In April 2009, as required by ARRA, the Federal Railroad Administration released its strategic plan detailing the agency’s vision for the development of high-speed rail in the United States. The plan formally identified ten corridors as potential funding targets, including the Florida Corridor.

In December 2010, Transportation Secretary Ray LaHood announced $1.2 billion (£990 million) in grants for Wisconsin and Ohio would be removed and redirected to other states due to opposition from the states’ respective governors to high speed rail. This opened an opportunity for the Florida government, as it received $342 million (£281 million) from the federal government to establish its own high speed network.

Again, it would be a Republican governor that would halt the progress of high speed rail in Florida. In February 2011, Florida governor Rick Scott declared that he would reject all federal funds to construct a high-speed railway in the state. Governor Scott’s reasoning behind cancelling the project was that it would be “too costly to taxpayers” and that “the risks far outweigh the benefits”. Those funds were once again redistributed to other states.

Scott’s announcement did not fall upon deaf ears in Florida. Brightline was soon proposed by All Aboard Florida to end the constant rejections by Republicans and establish a passenger railway on the east coast of Florida. The persistence shown by the Florida High Speed Rail Authority and other advocates for passenger rail ultimately paid off. No matter how much President Obama and his administration can try, in the end it is the states and its residents who can abet or thwart efforts to establish inter-city passenger railways.

By connecting the metropolises of Orlando and Miami, Brightline will be a welcome addition to the state of Florida. In a state that is deprived of suitable public transport, Brightline will help fill that void.  Flagler’s dream of an east coast connected by rail will soon be realized in modern times, despite taking decades to achieve.